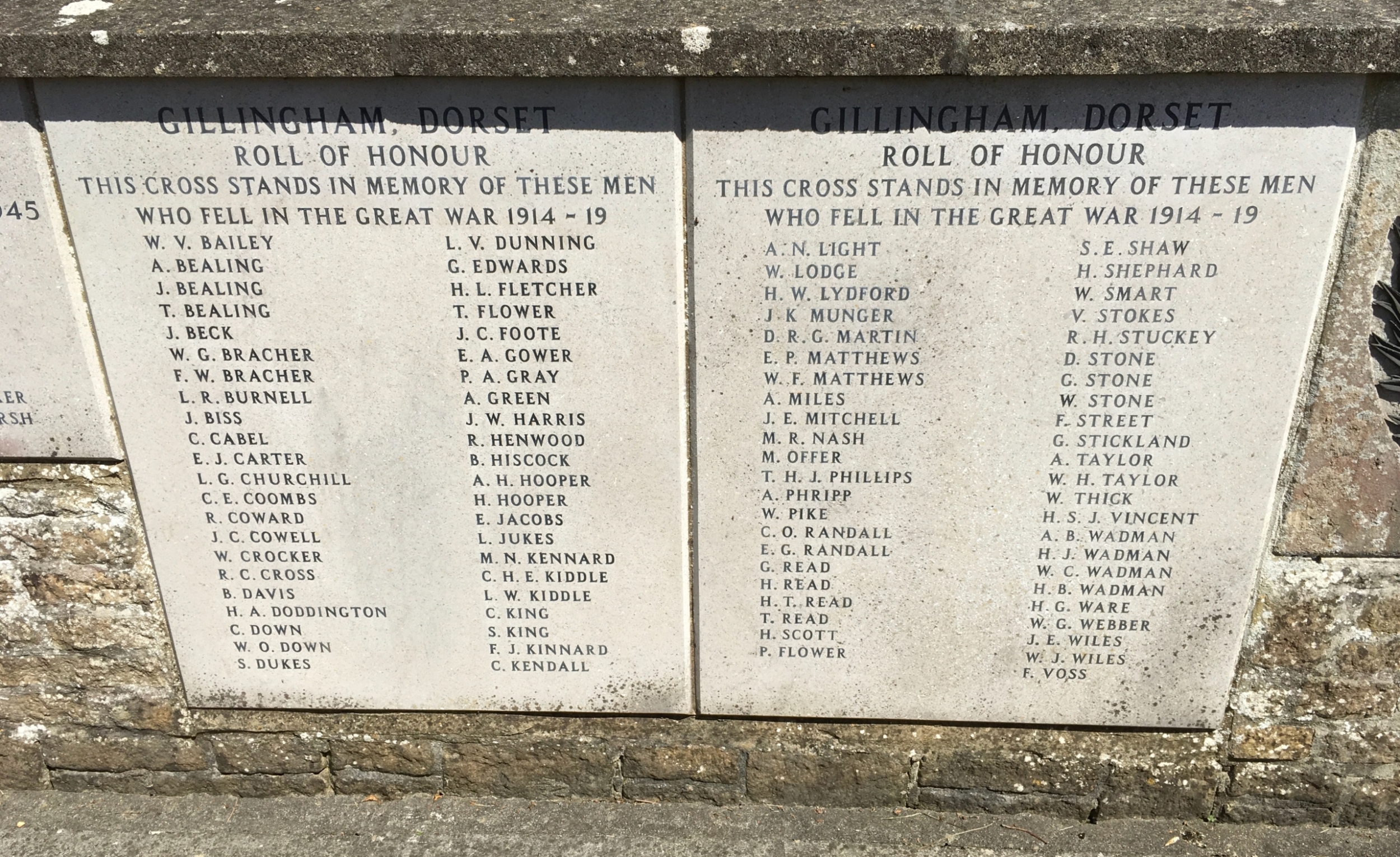 Surname: Stokes
Other names: Victor
Other people in this story: Harry StokesAugusta Farmer Stokes née Gatehouse
Locations in this story: Hartgrove, Shaftesbury, DorsetMilton, Gillingham, DorsetFrance & FlandersMericourt-L'Abbe Communal Cemetery Extension, Somme, FranceGillingham War Memorial, Gillingham, Dorset
Story: Victor Stokes was born in Hartgrove, Shaftesbury, Dorset, registered in the 1st quarter of 1900, the son of Harry Stokes and Augusta Farmer Stokes (née Gatehouse), a local family.  Victor lived for the first few years of his life at Hartgrove but, by 1905, had moved with his family to Milton, Gillingham, Dorset.  He enlisted with the 8th Battalion of the Princess Charlotte of Wales's (Royal Berkshire) Regiment as a Private (Service No. 45981).  He served in France & Flanders where, according to the Dependant's Pension Record Form, he was accidentally killed on 5th September 1918.  He was buried in the Mericourt-L'Abbe Communal Cemetery Extension, Somme, France, (Grave Ref: III. H. 15.) and is remembered on the Gillingham War Memorial.   He was awarded the Victory and British War medals.
Images:
Links to related web content / sources: The National ArchivesCommonwealth War Graves Commission

He enlisted on 6th November 1914 with the 4th Battalion of the Dorsetshire Regiment (with whom he had served as a Territorial earlier) as a Private (Service No. 3138 updated to 3730). He was immediately discharged on 7th November 1914 as being medically unfit for service.  He re-enlisted on 22nd November 1915 and was accepted into the 13th Battalion of the Princess Charlotte of Wales (Royal Berkshire) Regiment as a Private (Service No. 30947).  He served in France before being transferred to the Royal Engineers as a Sapper (Service No. 308716) then again to the Labour Corps (Service No. 98541).  He was eventually discharged on 22nd March 1919 and awarded the Victory and British War medals.  By the 1939 Register he was living at Jenkins Corner, Donhead St. Mary, Wiltshire, and was working as a Stone Mason.  His death is recorded at the Mere, Wiltshire, District Registry in 1968.
Images:
Links to related web content / sources: The National Archives
Surname: Bridle
Other names: Jubel Frederick
Other people in this story: Frederick Eli BridleMaria BridleChristina M. Bridle née Reakes
Locations in this story: Donhead St. Mary, WiltshireWells, SomersetMere, Wiltshire
Story: Jubel Frederick Bridle was born in Donhead St. Mary, Wiltshire, on 8th May 1894, the son of Frederick Eli and Maria Bridle.  He lived his early life in Donhead St. Mary, Wiltshire.  He enlisted on 11th December 1915 in Shaftesbury and joined the Somerset Light Infantry as a Private (Service No. 20988).  On the 4th May 1916 he was transferred to the 2/5th Battalion of the Queen's Own (Royal West Kent) Regiment (Service no. 241262) during which time he was also attached for a period to the Royal Berkshire Regiment.  He served all his time in the United Kingdom.  He was discharged on 26th June 1917 being no longer physically fit for military service.  He received the Silver War Badge No. B131877.   He married Christina M. Reakes in Wells, Somerset, in 1917.  There is no information about children of the marriage.  By the 1939 Register he was living at Church Cottage, Mere, Wiltshire, working as a Chimney Sweep.  He died in the Mere, Wiltshire, Registration District in 1953.
Images:
Links to related web content / sources: The National Archives

Surname: Jesse
Other names: Frank
Other people in this story: William JesseKate Rose Jesse née JeanesReginald JesseCharlie Jesse
Locations in this story: Fontmell Magna, DorsetFrance & FlandersSoissons Memorial, Aisne, FranceGulliver's Farm, East Orchard, DorsetShaftesbury Grammar School, Shaftesbury, DorsetSturminster Newton, Dorset
Story: Frank Jesse was born in 1899 in Fontmell Magna, Dorset, and baptised there on 21st May, 1899. He was the son of William Jesse, a Miller & Farmer, and Kate Rose Jesse (née Jeanes). Unfortunately his mother passed away on 26th March, 1899 possibly following Frank's birth. His father died in 1905. At the time of the 1911 Census he was single, was a scholar and living with his brother, Reginald, at Gulliver's Farm, East Orchard, Dorset. Another brother Charlie also went on to serve in the war, with the City of London Regiment and Royal Engineers.

Frank attended Shaftesbury Grammar School between April 1912 and July 1913. He enlisted in Sturminster Newton as a Private and joined the 2nd Battalion of Princess Charlotte of Wales's (Royal Berkshire) Regiment (Service No. 44857). He served in France & Flanders and was awarded the Victory and British War medals. He died on 27th May 1918 and was buried at Soissons Memorial, Aisne, France. He is remembered on the Fontmell Magna War Memorial and the Shaftesbury Grammar School Memorial now in the hall at Shaftesbury School. (Originally his name was missed off the Fontmell Magna memorial and had be hurriedly added at a later date).

His name was also included on a hand written list of Shaftesbury Grammar School old boys serving during the war. An asterix can be seen next to Frank's name, indicating that he had died. The board is now at Gold Hill Museum.

Surname: Haskett
Other names: Harry Charles
Other people in this story: Alfred HaskettHarriett Haskett nee LawrenceFrederick Haskett
Locations in this story: Fontmell Magna, DorsetFrance & FlandersPozieres Memorial, Somme, FrancePenn Hill, Bedchester, DorsetDorchesterBedchester, Shaftesbury
Story: Harry Charles Haskett was born in 1895 at Fontmell Magna and was baptised there on 17th March, 1895. He was the son of Alfred Haskett, a capenter on an estate, and Harriett Haskett (nee Lawrence). His siblings included Frederick, born in 1896, who also died in the war. At the time of the 1911 Census, he was working as a Telegram Messenger and living at 75 Penn Hill, Bedchester, Shaftesbury. He enlisted in Dorchester as a Private with the Dorsetshire Regiment (Service No. 25855) later transferring to the 2/4th Battalion of Princess Charlotte of Wales's (Royal Berkshire) Regiment (Service No. 34258). He served in France & Flanders and was awarded the Victory and British War medals. He died on 21st March 1918 and his name appears on the Pozieres Memorial, Somme, France, (Panel 56 and 57). He is remembered on the Fontmell Magna War Memorial, Shaftesbury.
Images:
Links to related web content / sources: Commonwealth War Graves CommissionThe National Archives

Surname: Fricker
Other names: William Thomas
Other people in this story: James FrickerAnnie Fricker nee Read
Locations in this story: East Knoyle, Wiltshire France & FlandersThiepval Memorial, FranceMilton, East Knoyle, WiltshireDevizes, Wiltshire
Story: William Thomas Fricker was born in 1889 in East Knoyle. He was the son of James Fricker, a Gardener, and Annie Fricker (nee Read). At the time of the 1911 Census he was single, working as a Farm Labourer and living at Milton, East Knoyle, Wiltshire. He enlisted in Devizes, Wiltshire, as a Private in the 5th Battalion of Princess Charlotte of Wales's (Royal Berkshire) Regiment (Service No. 23678). He served in France & Flanders and was awarded the Victory and British War medals. He died on 19th October 1916 and his name appears on the Thiepval Memorial (Pier & Face 11 D.). He is remembered on the East Knoyle War Memorial.
Images:
Links to related web content / sources: Commonwealth War Graves CommissionThe National Archives

Surname: Morgan
Other names: Frederick Charles George
Other people in this story: Charles John MorganMary Ellen Morgan née Mullens
Locations in this story: ShaftesburyFrance & FlandersPozieres Memorial, Pozieres, Somme, FranceEnmore Green, ShaftesburyHoly Trinity Church, ShaftesburySt. Peter's Church, Shaftesbury
Story: Frederick Charles George Morgan was born on 1st October, 1898 in Shaftesbury and baptised at Holy Trinity Church on 30th October,1898. He was the son of Charles John Morgan, a furnaceman, and Mary Ellen Morgan (née Mullens). At the time of the 1911 Census he was single, a scholar and living at Enmore Green, Motcombe, Shaftesbury. He enlisted as a Private with the 2nd Battalion of Princess Charlotte of Wales's (Royal Berkshire) Regiment (Service No. 38573). He served in France and Flanders and was awarded the Victory and British War medals. He died in France on 2nd April 1918 and is remembered on the Pozieres Memorial, Pozieres, Somme, France (Panels 56 & 57). He is remembered on the Park Walk War Memorial and on the Holy Trinity Memorial, now in St. Peter's Church, Shaftesbury.
Images:
Links to related web content / sources: Commonwealth War Graves CommissionThe National Archives