Surname: Tucker
Other names: George Farley
Other people in this story: Gideon TuckerMary Elizabeth Tucker née FootMabel Ethel Annie Tucker née BrickellSidney Wilfred TuckerVictor Douglas Tucker
Locations in this story: Shaftesbury, DorsetCann, Shaftesbury, DorsetFrance & FlandersSt. James, Shaftesbury
Story: George Farley Tucker was born in Shaftesbury, Dorset, on 3rd July 1890 and baptised at St. James' Church on 3rd August 1890, the son of Gideon Tucker and Mary Elizabeth Tucker (née Foot).  He grew up in the family home at 25 St. James Street in Shaftesbury. He married Mabel Ethel Annie Brickell at St. Rumbold's Church, Cann, Shaftesbury, on 23rd September 1916.  He had enlisted with the Territorial Force of the Somerset Light Infantry as a Private (Service No. 33038).   He served in France and Flanders and whilst there was awarded the Distinguished Conduct Medal.  After his discharge he was also awarded the Victory and British War medals as well as the Territorial Force War Medal.

By the time of the 1939 Register he was living at 31 Coppice Street, Shaftesbury, Dorset, and was described as a Motor Painter; his 1931 Kelly's Directory entry called him a coach and body builder and painter.    He died in Shaftesbury on 22nd December 1967 and was buried at St. Rumbold's Church, Cann, Shaftesbury, on 27th December 1967. 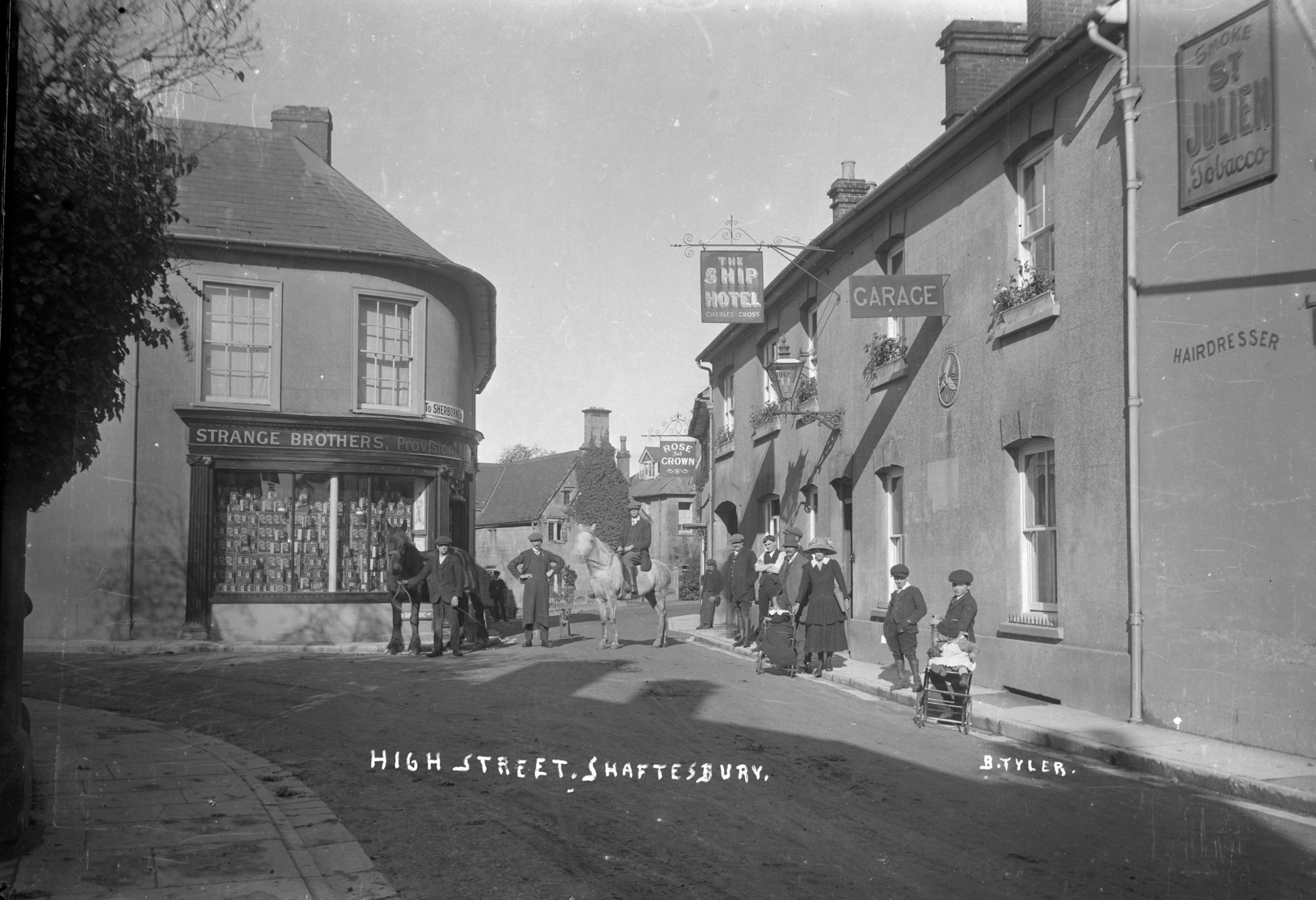 Surname: Hibberd
Other names: Wilfred Stanley George
Other people in this story: Emma HibberdBertha Hibberd née Hunt
Locations in this story: South Newton, WiltshireEnmore Green, Shaftesbury, DorsetSalisbury Street, Shaftesbury, DorsetMoorside, Marnull, DorsetSturminster, Dorset
Story: Wilfred Stanley George Hibberd was born in South Newton, Wiltshire, on 5th November 1877 and baptised there on 16th December 1877, the son of Emma Hibberd.  Wilfred lived with his grandparents at South Newton until, by 1901, he had moved to the Post Office and Shop at Enmore Green, Shaftesbury, Dorset where he met and married Bertha Hunt in 1912.  By this time he was living at 20 Salisbury Street, Shaftesbury, Dorset.  He enlisted with the 11th Battalion of the Somerset Light Infantry and was promoted in time to Corporal (Service No. 265596).  It was not known in which theatre of war he served but after his discharge on 11th March 1919 he was awarded the Victory and British War medals.   By the time of the 1939 Register he was living at the General Stores, Moorside, Marnull, Dorset and was described as an Outfitter's Traveller. It was also noted that he was a Methodist Lay Preacher.  His death was recorded in the Sturminster, Dorset, Registry in 1973 and he was buried at Marnull on 24th October 1973.
Images:
Links to related web content / sources: The National Archives 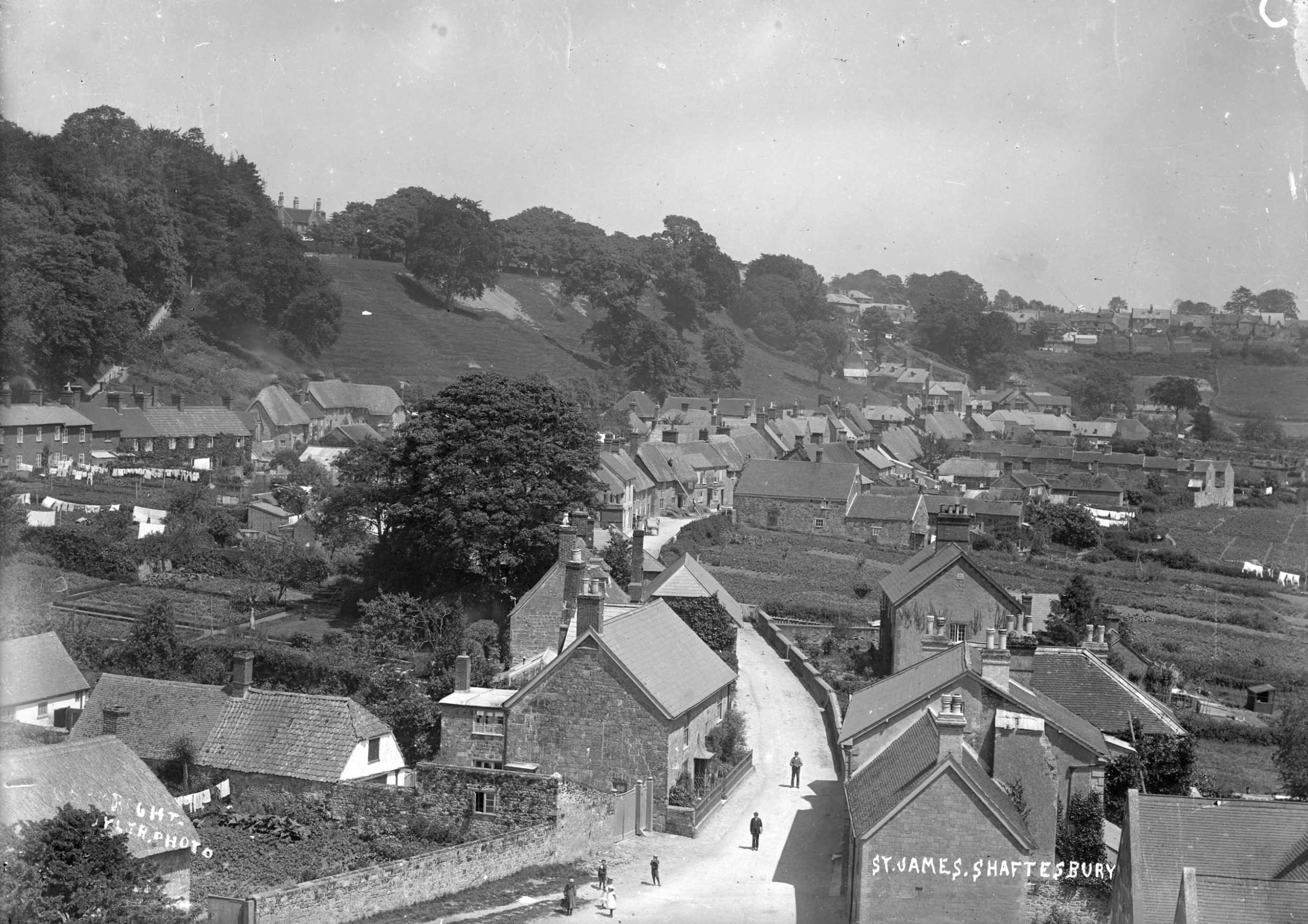 Surname: Imber
Other names: Sidney William
Other people in this story: John ImberElizabeth Ann Imber née LodderMaude Ellen Rhoda Imber née Anderson
Locations in this story: Coppice Street, Shaftesbury, DorsetPoole, DorsetChurchill Road, Parkstone, DorsetHinton Parva, DorsetSt. James, Shaftesbury
Story: Sidney William Imber was born in Shaftesbury, Dorset, on 15th July 1891, the son of John Imber and Elizabeth Ann Imber (née Lodder).  He lived his early life in and around the St. James area of Shaftesbury, Dorset. By 1911 he had moved to Poole, Dorset, to live with his cousin, following the death of his mother in 1900. His father died in 1912. He married Maude Ellen Rhoda Anderson at St. Osmund's Church, Parkstone, Dorset, on 14th November 1915.

Sidney enlisted and joined the 1st/5th Battalion of the Somerset Light Infantry as a Private (Service No. 55086), later transferring to the 2nd/4th Battalion of the Dorsetshire Regiment (Service No. 202147).  It is not known which theatre of war he served in but on his discharge on 25th October 1919 he was awarded the Victory and British War medals.  The 1939 Register shows him living at 39 Coppice Street, Shaftesbury, Dorset, working as a Butcher.  By the time of his death on 3rd June 1966 he had moved to 124 Churchill Road, Parkstone, Dorset.  His ashes were interred at the church in Hinton Parva, Dorset, on 22nd July 1966.
Images:
Links to related web content / sources: The National Archives 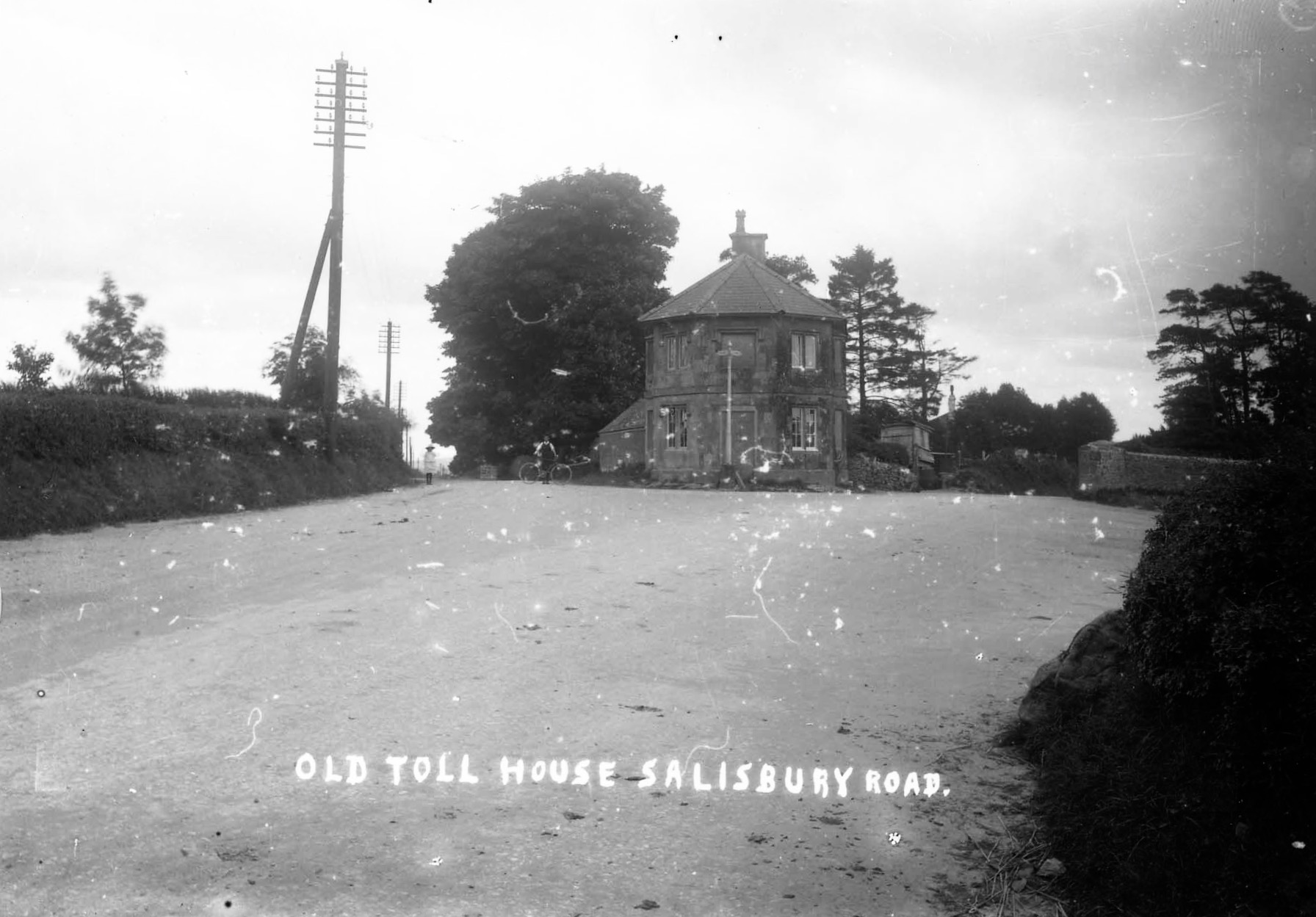 Surname: Weldon
Other names: Montague Wyndham
Other people in this story: Charles WeldonHarriet Madonna Louisa Weldon née RobertsVictoria Weldon née IsaacsEdgar Reginald WeldonVictor Stanley Weldon
Locations in this story: Cann, Shaftesbury, DorsetShaftesbury, DorsetSalisbury Road, Cann
Story: Montague Wyndham Weldon was born in Shaftesbury, Dorset, on 24th April 1895, the son of Charles Weldon and Harriet Madonna Louisa Weldon (née Roberts).   He spent most of his life at the at the family home known as the Round House or Toll House, Cann, Shaftesbury, Dorset.   He enlisted and joined the Somerset Light Infantry as a Private (Service No. 55127) but later transferred to the 2nd/4th Battalion of the Dorsetshire Regiment (Service No. 201898).  It is not known in which theatre of war he served but on his discharge was awarded the Victory and British War medals.   He married Victoria Isaacs in Shaftesbury, Dorset, in 1921 and they went on to have three children.   By the time of the 1939 Register Montague was living in a Caravan, Nr. Hedgeside Farm, Salisbury Road, Cann, Shaftesbury, Dorset, and was described as a Wood Merchant. By 1943 he was called a Scrap Iron Dealer per his mother's probate.  He died at Shaftesbury on 11th February 1977.  His brothers, Edgar Reginald Weldon and Victor Stanley Weldon, also served in the conflict.
Images:
Links to related web content / sources: The National ArchivesEdgar Reginald WeldonVictor Stanley Weldon

Surname: Parsons
Other names: Harry Stanley
Other people in this story: John ParsonsElizabeth Harriet Parsons née PikeDora Ivy Parsons née HuntCharles Douglas ParsonsWilliam John Parsons
Locations in this story: Westbury, WiltshireEnmore Green, Shaftesbury, DorsetCann, Shaftesbury, DorsetWarminster, Wiltshire
Story: Harry Stanley Parsons was born at Westbury, Wiltshire, on 21st April 1899 and baptised there on 30th April 1899, the son of John Parsons and Elizabeth Harriet Parsons (née Pike).  He lived his early life in Enmore Green, Shaftesbury, and Cann, Shaftesbury, Dorset.   He enlisted with the Somerset Light Infantry as a Private (Service No. 40426).   He was posted to the 7th Battalion though it is not known which theatre he served in.  On his discharge he was awarded the Victory and British War medals.   He married Dora Ivy Hunt at Westbury, Wiltshire in 1927.   By the 1939 Register he was living at Penleigh Farm, Westbury, Wiltshire, and was described as a Dairy Farmer.   His death is recorded at the Warminster, Wiltshire, Registry in 1990 and he was buried at Westbury.  His brothers, Charles Douglas Parsons and William John Parsons, also served in the conflict.
Images:
Links to related web content / sources: Charles Douglas ParsonsWilliam John ParsonsThe National Archives
Surname: Smith
Other names: Harry Sidney
Other people in this story: Harry SmithMary Smith née MitchellHarriet Smith née FannerMontague Smith
Locations in this story: Wilton, WiltshireShaftesbury, DorsetHawkesdene, Cann, Shaftesbury
Story: Harry Sidney Smith was born in Wilton, Wiltshire, in 1869 and baptised there on 29th November 1869, the son of Harry Smith and Mary Smith (née Mitchell).  By 1871 the family had moved to Shaftesbury, Dorset. Harry had married Harriet Fanner in Shaftesbury in 1870 and they went on to have two children.  Harry had obvious extended service with the military but the only information found is that he is listed on the Absent Voters list for 1918 as being Company Quartermaster Sergeant with the 13th Battalion of the Somerset Light Infantry (Service No. 265708).  His last known address was in Hawkesdene, Cann, Shaftesbury and his death was recorded at Shaftesbury in 1934.

Harry's brother Montague (b.1889) also had a career with the army, with the Lancers, the Machine Gun Corps and the Royal Tank Corps.
Images:
Links to related web content / sources: The National ArchivesMontague Smith
Surname: Tuffin
Other names: Henry John
Other people in this story: Frederick James TuffinSarah Anne Tuffin née Mullins
Locations in this story: The Street, Sutton Waldron, DorsetFrance & FlandersSturminster Newton, Dorset
Story: Henry John Tuffin was born in Sutton Waldron on 23rd January 1877 and baptised there on 1st April 1877, the son of Frederick James Tuffin and Sarah Anne Tuffin (née Mullins).  He spent all his civilian life in Sutton Waldron.   He enlisted on 18th November 1915 and was mobilized on 24th March 1916, joining the Somerset Light Infantry as a Private (Service No. 24987). Almost immediately he was transferred with the same Service No. to the Duke of Cornwall's Light Infantry with whom he served in France & Flanders.  He was again transferred and attached to the 1039th Agricultural Company of the Labour Corps on 6th May 1917 (Service No. 93437).   He was discharged on 15th March 1919 and awarded the Victory and British War medals.   By the 1939 Register he was living at his old family home at 17 The Street, Sutton Waldron, Dorset, working as an Agricultural Labourer.  He remained single throughout his life and died in 1967. His death was registered at the Sturminster Newton District Registry, Dorset and he was buried at Sutton Waldron on 30th November 1967.
Images:
Links to related web content / sources: The National Archives