A wide variety of sport was enjoyed by Shastonians of all ages, varying from impromptu football matches and sledging to point-to-point meetings, shooting and hunting.

Children in St James practised football skills in the playground, and in winter, the hill below Park Walk was turned into one massive slide opposite the Two Brewers pub … not for the faint-hearted.
Pythouse Sports Club was started in 1870 as a private cricket club for the Benetts who owned Pythouse. They were very keen on cricket and even added two huge wings to Pythouse in 1880 to accommodate visiting cricket teams.
By early 1900 the new sport of lawn tennis was introduced and there is a photo of elegant ladies in long white dresses playing on the grass courts at the club. A 1920 brochure boasts that the club was used for preparatory tennis matches before Wimbledon and that the cricket ground was the best south of the Thames besides the Oval.

Hunting with hounds was a regular activity with Lord Portman’s Hunt, and a popular spectator sport for many. The hunt met at various venues, including on the Pensbury Estate, at the junction between the Motcombe and Gillingham Roads, just outside Shaftesbury. 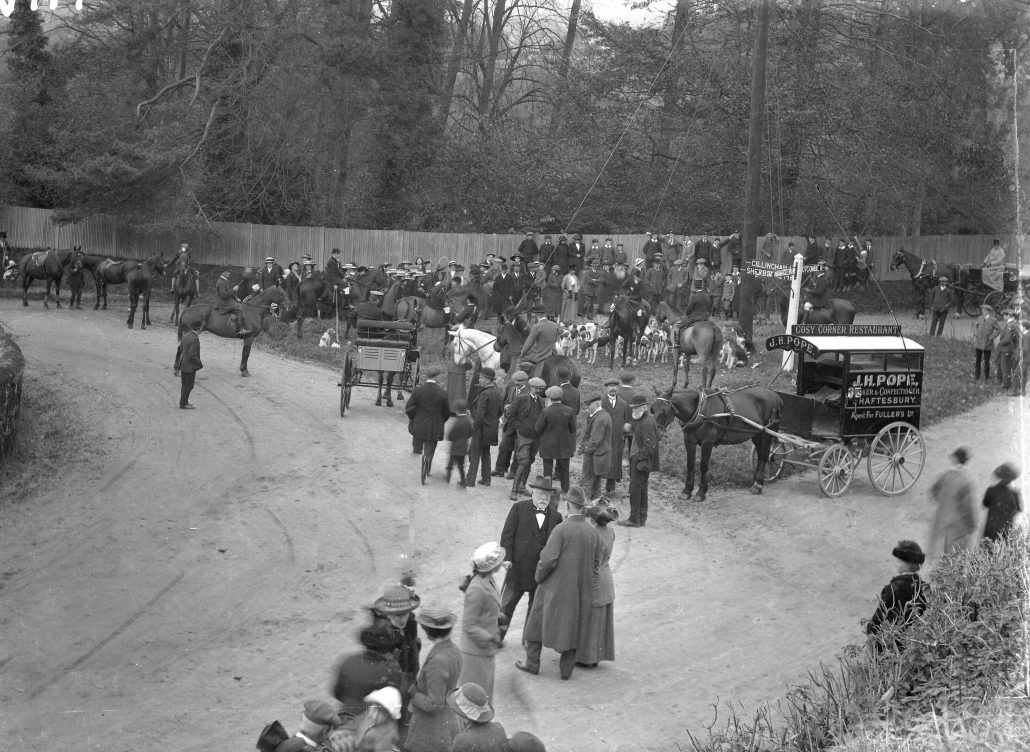 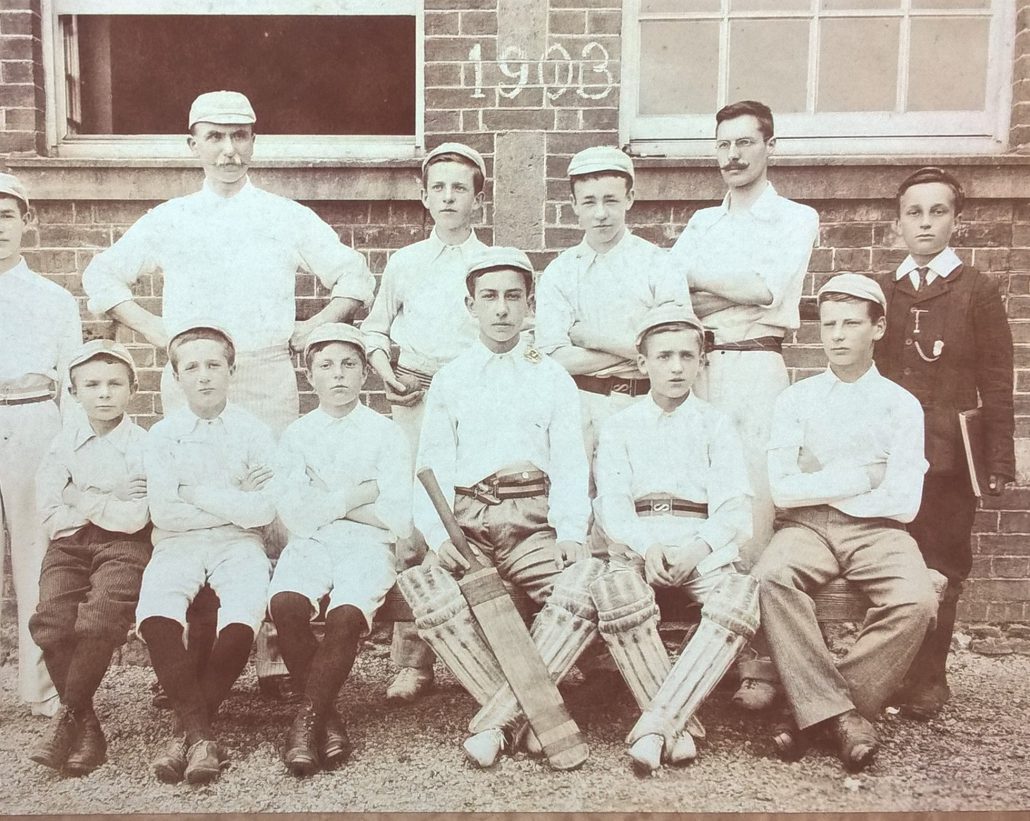 Shaftesbury Cricket Club was founded by 1850, and possibly earlier, making it one of the oldest cricket teams in the county. Dr Tovey, the head of Shaftesbury Grammar School for many years including during the Great War, was a very keen cricketer, and not only supported it within the school, but also sought players from other schools, giving a scholarship to Victor Prince, a pupil at Salisbury Cathedral School, because he had showed such potential. Tragically Victor was killed on active service in 1918 aged 20. Shaftesbury Grammar School played against many local teams, including Shaftesbury Town, Gillingham Town, and Tisbury Town, as well as other local schools.

Motcombe House had a cricket team founded in the 1860s, and a village team was formed in 1900. Matches were played regularly, and a pavilion was built. The club reached its peak in the inter-war years, but fixtures continued throughout the war, even though some players were called up 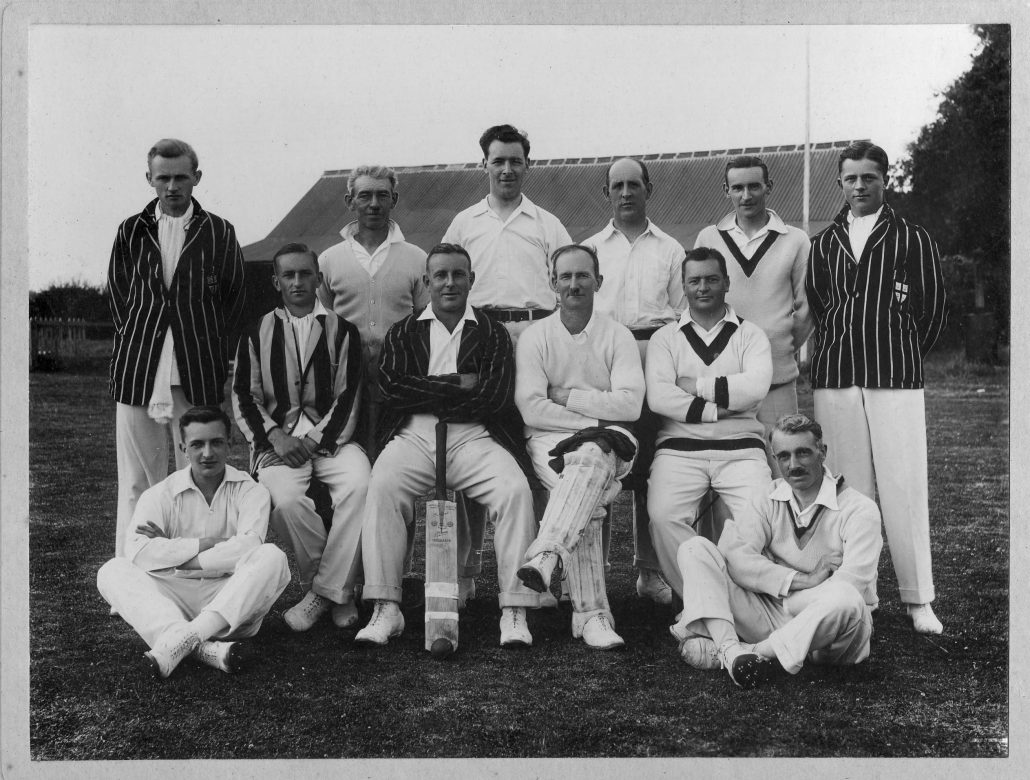 In April 1914  a meeting was held to discuss the setting up of a bowling club. After considering Castle Hill as a possible site for the green, it was decided that the most suitable place for a bowling club was on part of the cricket field, part of which was already used by the tennis club. At the first committee meeting in May 1914 it was decided to buy two sets of bowls and a set of jacks. Bye-laws for the club were adopted and the first match between the council and the members was arranged.

A special members’ meeting was held in October 1914 when the sub – committee presented a report on building a green for a total cost of £48.11.6d.

It was agreed to accept this tender, money to be raised by a levy of 2 guineas (£2.10p) on each member. Members’ fees were set as a joining fee of one guinea  and an annual subscription of 10/6d (52p).The first green was situated between the present green and Bleke Street. It opened on 14th July 1915 with a match between the Mayor and members of the Corporation on one side, and the club members on the other. The first away match was at Crewkerne in July 1915. In 1916 the club bought Holy Trinity Church Parish Room and moved it to the bowling green, as the club’s first pavilion.

During 1920 the club played six friendly matches, winning five of them, and they won the Macklin Cup thus also winning the Salisbury League.

in April 1921, it was decided to affiliate the club to the English Bowling Association. The Macklin Cup was retained and in 1922, County Cup matches commenced and Shaftesbury Bowls Club retained the Macklin Cup for the third and last time.

In April 1923,  members donated money for repairs to the green. In November 1924 , the club had a surplus in the bank, twenty-six playing members and five honorary members. It was decided to hold a singles competition and a handicap singles and the vice president Mr Borley  supplied a Challenge Cup. This trophy is still played for today.

In the 1920’s the first youth team was formed called Shaftesbury Athletic. 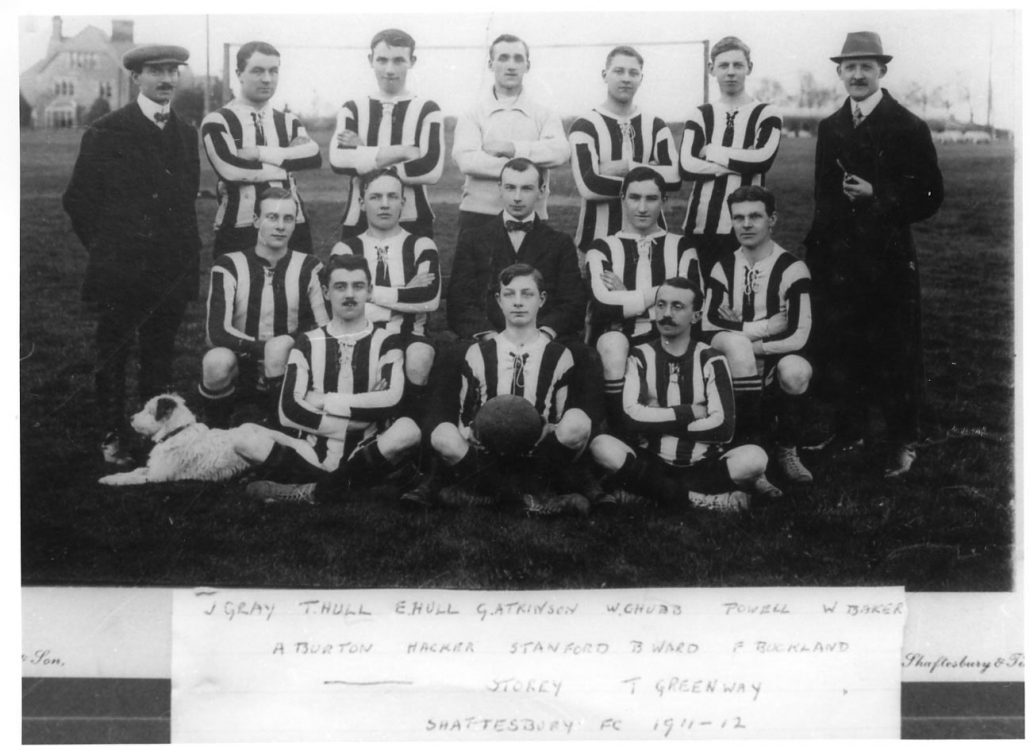 Although many Shaftesbury residents worked long hours in agriculture, commerce and trade, there was a wide choice of things to do in their free time, or during holidays.
Some activities were ‘improving’, such as the Women’s Adult School, based on Christian principles with the aim of teaching reading and writing skills; and temperance societies. In 1912, Mrs John Rutter invited women in the town to a ‘drawing room meeting’ to discuss the formation of a women’s temperance association. This was unanimously supported and the new branch was congratulated by the Reverend Ehlvers who chaired the meeting.

The Literary Institute on Gold Hill opened in 1852. In 1911 there were 200 members and 100 lady subscribers. The institute operated as a circulation library and had about 5,500 books and a billiard room.

Suffragettes met in the Market Hall. On one occasion they were subjected to explosives being ignited under the stage by their detractors, and had to be escorted to the Grosvenor Hotel by the police.

The Grammar School, 12-1pm each weekday and 5-6pm on Tuesdays and Thursdays

Admission by ticket only, which may be obtained at the Town Clerk’s Office. Mr J.K.Rutter, 31, Bell Street

Shaftesbury Town Band was formed in 1869, and was known as ‘The Tin Whistle Band’. In 1898 when the Prince of Wales visited Shaftesbury, the town council helped buy instruments and uniforms for the band for the occasion. At the same time they were renamed The Shaftesbury Town Band. In 1903 the new bandmaster, Mr Inkpen, moved to Salisbury Street, and started music classes for new members. He built up the band over the next decade, and it managed to continue playing during the Great War, despite some members being on active service. One of these, Tom Wareham, took over as bandmaster on his return from the war. 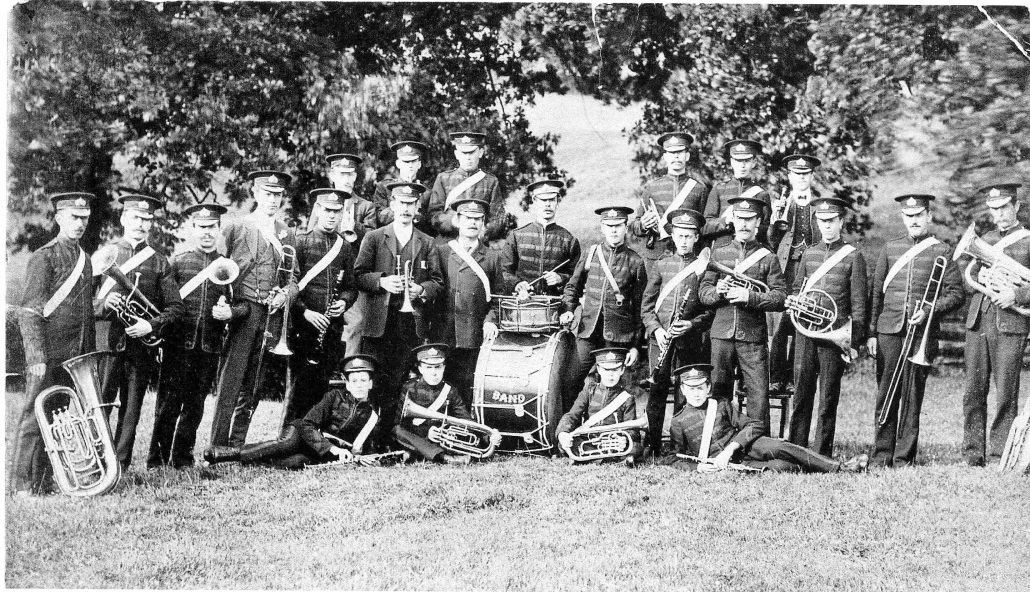 At least 8 pubs served the town, and in response, several temperance groups urging abstinence were set up. The Temperance Hall in Bell Street was the only venue big enough for entertainments of large numbers, although St James Church Hall in St James provided an alternative smaller venue. There were at least two skittle alleys, one on Gold Hill and the other next to the Crown pub on the High Street.
The earliest screen entertainment consisted of lantern shows in the Ebenezer Hall in Salisbury Street, where educational films were shown weekly by Tom Pinney, a local businessman. Film shows were shown regularly in the Market House until the Picture Palace opened in 1913 in the High Street (near where ‘Bargains’ is now). Travelling picture shows pitched a large tent in the old Cattle Market. An organ played loud music, and the show was illuminated by electric lights powered by a large traction engine. 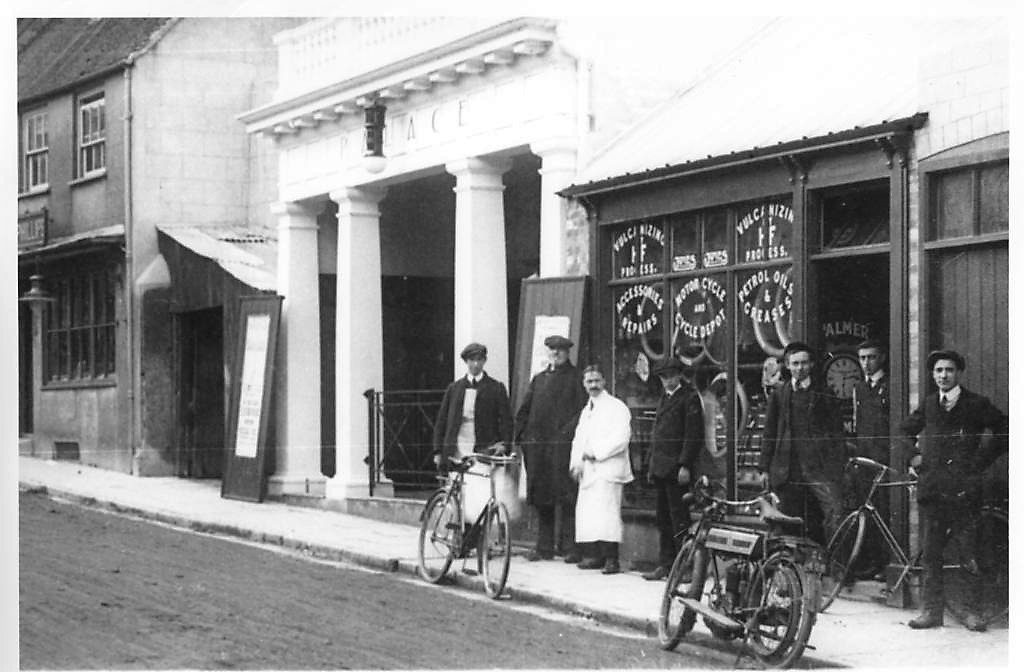 Children attended Sunday schools and each Christmas there was a Parish Tea held for them at St James’ School with entertainment provided afterwards by the Rector and choir, followed by a conjuror. In summer the children had an outing to Rushmore House and Larmer Tree Garden, or Fonthill. They were usually transported in wagons which had been brushed out and had planks laid across for seats.

Children also attended ‘night school’ for a small charge of 2/6d per term (about £10 in 2017) where there were lantern lectures every fortnight, and an end-of-term social with cakes, lemonade and music played on a phonograph. Boys also joined the Band of Hope, a temperance organisation, but in reality more of a social club. There were also Boy Scouts, and Girl Guides companies from about 1910 onwards.

Before the Great War there were regular annual events in the Shaftesbury calendar.

In 1907, a fundraising effort was made to pay for the enlarged chancel of Holy Trinity Church, consisting of a series of tableaux illustrating the history of the town. Many townspeople took part and it was an ambitious and very successful event, staged in the Market Hall. It was expensive to stage however, so the money raised was reduced significantly by the expenses.

When the circus came to town, there was a procession down the High Street, with elephants, horses and wild animals. At the top of Gold Hill, travelling entertainers, such as jugglers, strong men, and flame-throwers would set up alongside more down-to-earth travellers such as knife-grinders, and travelling salesmen.
Travelling repertory companies rented the Market House, sometimes for weeks at a time.
In the summer months there were regular outings to Cheddar Gorge, Larmer Tree Garden and other venues. Visitors travelled in open top charabancs, and the journeys must have been exciting but rather uncomfortable. 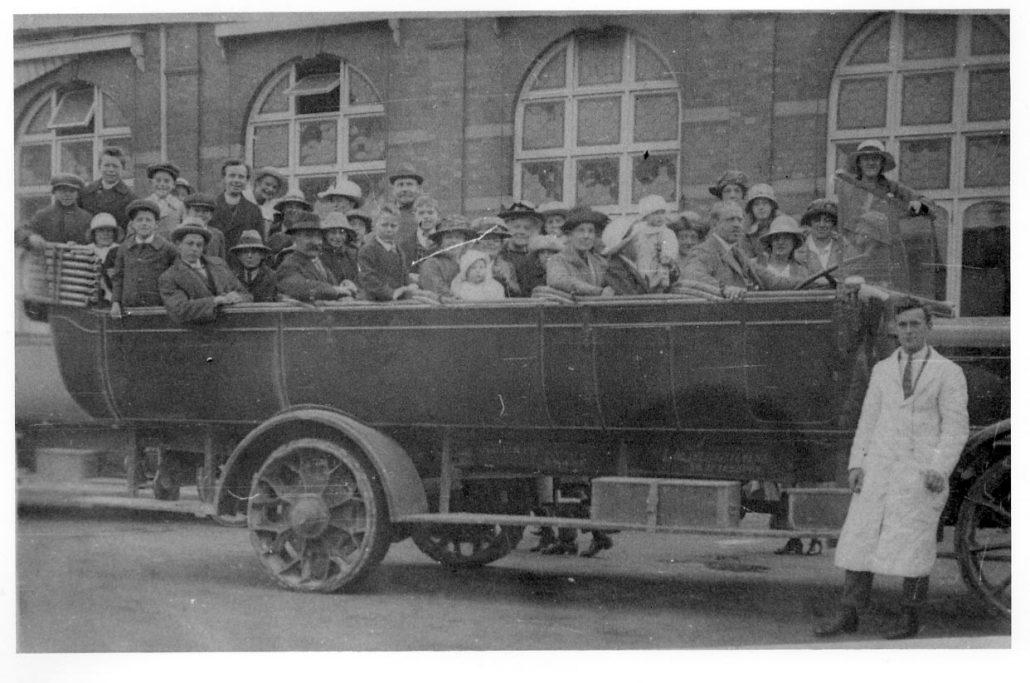 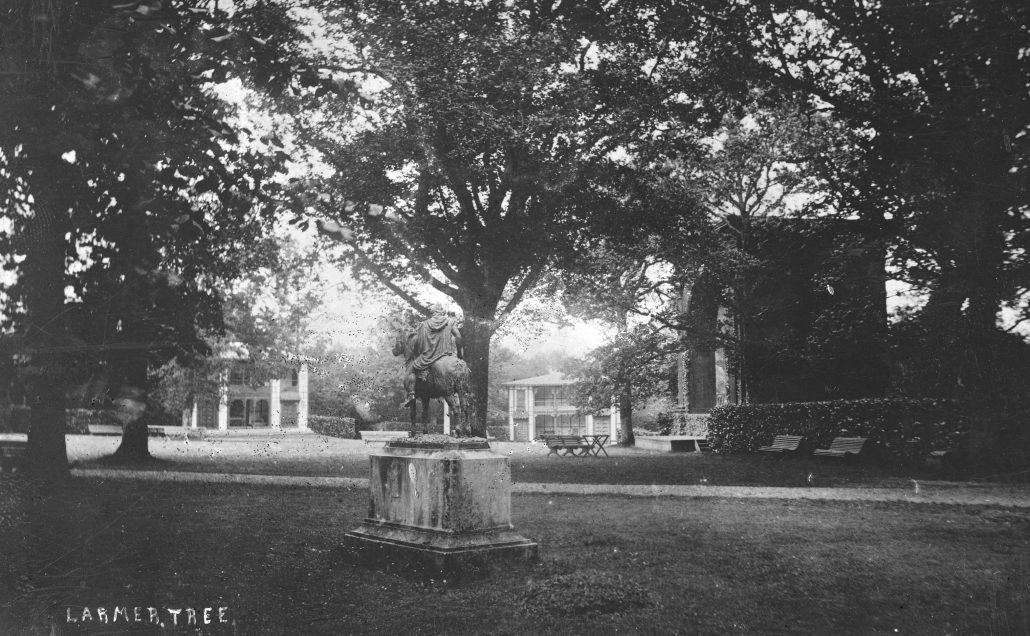 On bonfire night, fireworks were very popular, and one could buy a packet of 50 squibs, or bangers, for 6d (worth £2 in 2017). Boys and young men also used to make their own explosions, using gunpowder and a metal tube, sometimes with unfortunate consequences.

There were three annual fairs, the biggest being St Martin’s, which had a large number of market stalls from the High Street to the Commons. There was also a shooting gallery outside The Mitre, and swing-boats and coconut shies outside St Peter’s Church, and a boxing booth. The Chrysanthemum and Poultry Fair was held at the same time, so the fair was a highlight in the annual calendar. 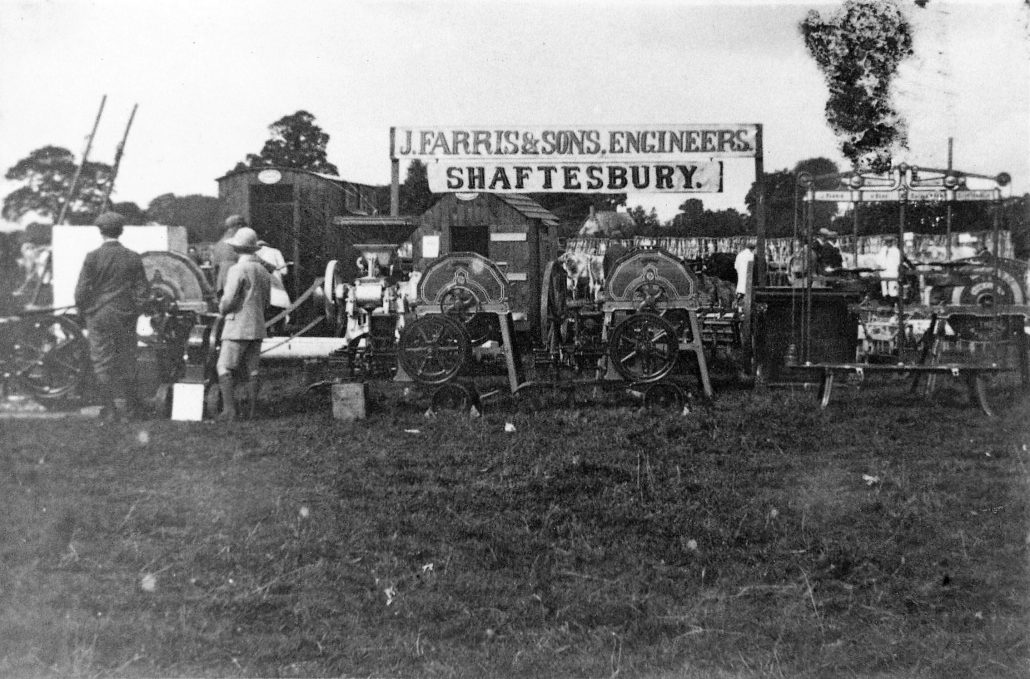 The Shaftesbury Carnival was one of the biggest carnivals in the south-west. It could be a very boisterous affair, and drew people from miles around. Quite often the floats reflected events during the previous year, and caused some embarrassment to those whose actions received the full glare of publicity! The town’s fire brigade produced splendid floats, “their speciality being prehistoric monsters of incredible length and ferocious aspect” (A.G.Gray). The money raised went to the Westminster Memorial Hospital, and the carnival was well supported by local people.