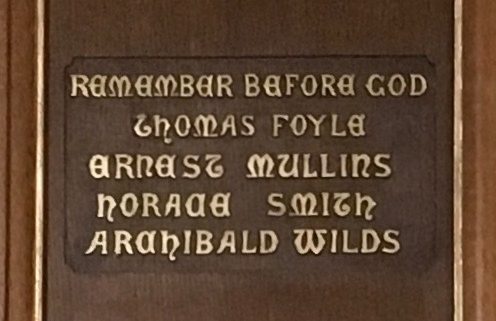 Surname: Mullins
Other names: Ernest James
Other people in this story: Adam MullinsSarah Priscilla Mullins née GalpinEthel Bessie Mullins née Miles
Locations in this story: Donhead St. Mary, WiltshireGillingham, DorsetBlackford, North Cadbury, SomersetFrance & FlandersThiepval Memorial, FranceSt. Michael's Church, Blackford, SomersetCastle Cary, Somerset
Story: Ernest James Mullins was born, along with his twin sister, Bessie Ada, in 1883 in Donhead St. Mary, Wiltshire. He was the son of Adam Mullins, a market gardener, and Sarah Priscilla Mullins (née Galpin), a dressmaker. At the time of the 1901Census he was boarding at Wyke, Gillingham, Dorset and working as a Groom. On 13th October, 1904 Ernest married Ethel Bessie Miles in Gillingham. At the time of the 1911 Census they were living in Blackford, North Cadbury, Somerset where Ernest was working as a farm labourer.

Ernest enlisted in Castle Cary, Somerset, as a Private in the Somerset Light Infantry (Service No. 22569). He later transferred to the 5th Battalion of the Dorsetshire Regiment (Service No. 19046) and served in France & Flanders. He was presumed killed in action at the Somme on 11th January 1917 and his name appears on the Thiepval Memorial in France. He is remembered on the War Memorial and Roll of Honour in St. Michael's Church, Blackford, Somerset.
Images:
Links to related web content / sources: