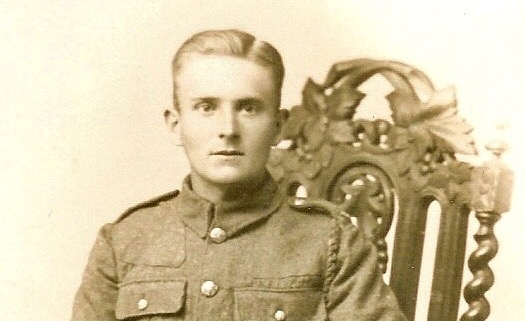 William enlisted on 5th June 1916, joining the Dorsetshire Regiment as a Private (Service No. 24155), serving in France and Flanders. After the Armistice he transferred to the Lancashire Fusiliers (Service No. 53044), serving in Germany and becoming 'Batman' to an officer.

Billy was finally demobilized on 15th November 1919. During his time in the army he had received a gunshot wound to his left hand and was now awarded a small short-lived pension due to his injury. He was also awarded the Victory and British War medals. By the time of the 1939 Register he was living at 17 Gold Hill, Shaftesbury, Dorset, working as a radio mechanic and salesman as well as volunteering as an ARP Warden.   He died in Shaftesbury on 15th November 1979.

Billy's brother Frank also served in the war, with the Wiltshire Regiment and the Royal Army Service Corps.

Surname: Knight
Other names: William Charles
Other people in this story: Charles KnightElizabeth Ann Knight née Gray
Locations in this story: Semley, WiltshireSt. James, Shaftesbury, DorsetSalisbury, WiltshireFrance & FlandersPloegsteert Memorial, Hainaut, BelgiumSt. Leonard's Church, Semley
Story: William Charles Knight was born in Semley, Wiltshire, in 1898 and baptised at St. Leonard's Church, Semley, on 20th February 1898, the son of Charles Knight and Elizabeth Ann Knight (née Gray).  He lived in Semley and St. James, Shaftesbury, Dorset, until, by 1911, his family had moved to Salisbury, Wiltshire. He enlisted with the Royal Field Artillery (Service No. 176400) but later transferred to the 11th Battalion of the Lancashire Fusiliers with the rank of Fusilier (Service No. 33489).  He was killed in action in Flanders on 10th April 1918. He is remembered on the Ploegsteert Memorial, Hainaut, Belgium (Panel 4) and on the Salisbury Guildhall Memorial in Salisbury, Wiltshire. He was awarded the Victory and British War medals.
Images:
Links to related web content / sources: The National ArchivesCommonwealth War Graves Commission

Surname: Smart
Other names: Frederick James
Other people in this story: Samuel SmartEliza Lambert Smart nee Pitman
Locations in this story: DorchesterFrance & FlandersLe Vertannoy British Cemetery, Hinges, Pas de Calais, FranceChurch Walk, Motcombe, DorsetMotcombe, Dorset
Story: Frederick James Smart was born in Motcombe on 21st February, 1896 and was baptised there on Easter Day, 5th April, 1896. He was the son of Samuel Smart, a Gardener's Labourer, and Eliza Lambert Smart (nee Pitman). At the time of the 1911 Census he was single and living at Church Walk, Motcombe, Dorset. He enlisted in Dorchester and joined the Dorsetshire Regiment (Service No. 25792) but later transferred to the 2nd Battalion of the Lancashire Fusiliers (Service No. 53045) and at the time of his death held the rank of Lance Corporal. He served in France & Flanders and was awarded the Victory and British War medals. He died on 9th August 1918 and was buried at Le Vertannoy British Cemetery, Hinges, Pas de Calais, France (grave id. D.18). He is remembered on the Motcombe War Memorial, Dorset.
Images:
Links to related web content / sources: Commonwealth War Graves CommissionThe National Archives