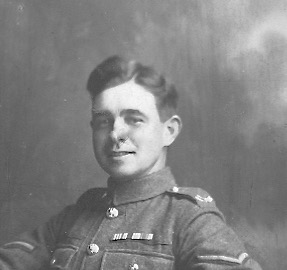 Surname: Kimber
Other names: Stanley
Other people in this story: William KimberEmily Ellen Kimber (nee Burden)Edith Sarah HannamArthur Fred Kimber
Locations in this story: Todber, Stour Provost, DorsetShaftesbury, DorsetHenstridge, SomersetFrance & FlandersYeovil, Somerset
Story: Stanley Burden (Kimber) was born in Todber, Stour Provost, Dorset, on 11 May 1891 the son of Emily Ellen Burden (his name was registered as Burden and he was baptised in that name on 13 May 1891.)  His mother married William Kimber in Stour Provost on 3 Dec 1891 and he was the presumed father of Stanley.  The family lived much of the time at Well Common, Todber.   Stanley married Edith Sarah Hannam in Henstridge, Somerset, on 23 Jan  1912.  He had served with the 10th Battalion of the Gloucestershire Regiment as a Private (Service No. 36572).  At some time he had transferred to the 1st Battalion and had received gun shot wounds to his right knee whilst serving in France and Flanders.  He was awarded the Military Medal for gallantry and had by then been promoted to Lance Corporal.  He was discharged on 23 Sep 1919 and was in receipt of a pension due to his previous wounds.  He was also awarded the Victory and British War Medals.   By the time of the 1939 Register he was living at Higher Marsh Farm, Station Road, Henstridge, Somerset, described as a Dairy Farmer.  His death was recorded in the Yeovil, Somerset, Registry in 1979.  His brother, Arthur Fred Kimber, had also served in the conflict.
Images:
Links to related web content / sources: Arthur Fred Kimber