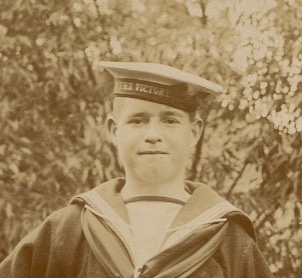 Surname: Kimber
Other names: Arthur Fred
Other people in this story: William KimberEmily Ellen Kimber (nee Burden)Margaret S. NewmanStanley Kimber
Locations in this story: Todber, DorsetShaftesbury, DorsetPortsmouth, HampshireJutland
Story: Arthur Fred Kimber was born in Todber, Dorset, (registered in Shaftesbury, Dorset) on 11 Jul 1898 the son of William Kimber and Emily Ellen Kimber (nee Burden).  He spent all his early life in Well Common, Todber, Dorset.    He had enlisted on 10 Nov 1914 with the Royal Navy as a Boy Class 2 eventually rising to the being an Able Seaman (Service No. J32863).  He served in many ships in many parts of the world including the Cruiser HMS Fearless at the Battle of Jutland.  Rather than being discharged at the end of the war, he signed on for extended service.  He was awarded the Victory and British War Medals as well as the 1915 Star.   He married Margaret S. Newman in Portsmouth, Hampshire, during 1926.   In 1928 he was due for discharge but signed on yet again.  On 26 Aug 1931 he was also awarded the Long Service and Good Conduct Medal.  By the time of the 1939 Register he was recorded living at 26 Totland Road, Portsmouth, Hampshire, described as an Able Seaman serving on HMS Viceroy (land based posting) with Service No. PJX159488.  His death was recorded in Portsmouth in 1984.  His brother, Stanley Kimber, also served in the conflict during which time he had been awarded the Military Medal. (NB. The family advise that Arthur also served in the 2WW from 1940 to 1944.  He was on board HMS King George V at a time which included the sinking of the German battleship Bismark.)
Images:
Links to related web content / sources: Stanley Kimber