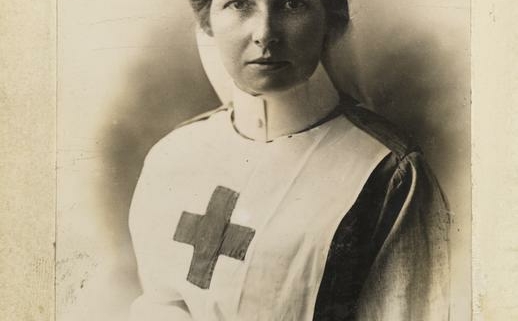 Surname: Munro
Other names: Minnie
Other people in this story: James Hainsworth Ismay
Locations in this story: Exbury, Hampshire1st Southern General Hospital, Selly Oak, BirminghamIwerne Minster, Dorset
Story: Minnie Munro was, according to 1911 Census information, born in 1884 in Exbury, Hampshire. (It has been difficult to confirm this as no record of her birth can be found.) At the time of the 1911 Census, she was single and working as a domestic maid for James Hainsworth Ismay, (Lord Ismay), owner of the Iwerne Minster estate. She enlisted with the Red Cross as a nurse in the VAD (Voluntary Aid Detachment) on 6th January 1916, her age then being given as 31 years. The official Red Cross record shows that she started working at the 1st Southern General Hospital, Selly Oak, Birmingham. However, her memorial inscription states that she commenced duties there in September 1915 which does not accord with the Red Cross records. She died at the hospital on 30th July 1917 from septic poisoning after contracting Pulmonary TB. She is remembered on the Iwerne Minster War Memorial, Shaftesbury.