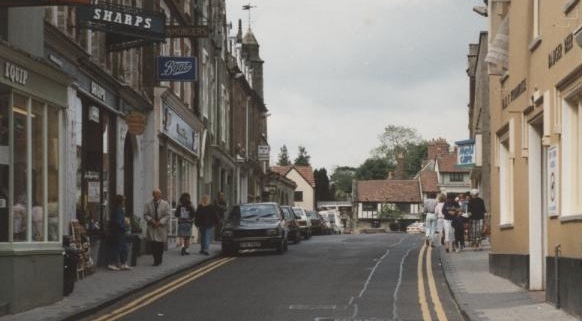 Surname: Dare
Other names: Edwin William
Other people in this story: William Edward DarePearl Dare née DaubneyAgnes Catherine Dare née Marsh
Locations in this story: Crown Hotel, High Street, Shaftesbury, DorsetMediterranean AreaSturminster, DorsetSalisbury Street, Shaftesbury
Story: Edwin (sometimes called Edward) William Dare was born in Shaftesbury, Dorset on 15th June 1896, the son of William Edward Dare and Pearl Dare (née Daubney).  He lived all his life, apart from Military Service, in the Shaftesbury area.  Much of his early life was living at the Crown Hotel, 40 High Street, Shaftesbury, where his father was the proprietor.  He enlisted with the Territorial Unit of the Dorsetshire Regiment on 5th September 1912 as a Private (Service No. 1669).  He was embodied on 4th August 1914 and transferred to the Royal Army Medical Corps (Service No. 461597).  He served with the Mediterranean Expeditionary Force where he contracted malaria for which he eventually received a small pension.   Following his discharge on 26th March 1919 he was awarded the Victory and British War medals as well as the Territorial Force War Medal.  He married Agnes Catherine Marsh in Shaftesbury, Dorset in 1927.   By the time of the 1939 Register he was living at 49 Salisbury Street, Shaftesbury, Dorset, working as a Driver Mechanic (Heavy Goods).   His death was recorded at the Sturminster, Dorset, Registry, in 1969.
Images:
Links to related web content / sources: The National Archives