Surname: Gillett
Other names: Frederick Edward
Other people in this story: Edwin John GillettEmily Mary Gillett née GouldAda Mary Gillett née Shute
Locations in this story: Hazelbury Bryan, DorsetDitcheat, Shepton Mallet, SomersetFrance & FlandersHartgrove Farm, Fontmell Magna, Shaftesbury, DorsetMarnull, DorsetPutney, LondonMoorcourt Farm, Moorside, Sturminster, DorsetWeymouth, Dorset
Story: Frederick Edward Gillett was born in Hazelbury Bryan, Dorset, on 7th June 1897 and baptised there on 15th August 1897, the son of Edwin John Gillett and Emily Mary Gillett (née Gould).  He spent his early life in Hazelbury Bryan and later in Ditcheat, Shepton Mallet, Somerset.  He enlisted with the Dorset (Queen's Own) Yeomanry (Service No. 56076) attached to the Machine Gun Section of the Camel Corps.  In due course he was  transferred to the 5th Dragoon Guards on appointment as 2nd Lieutenant then Lieutenant.  He served with his Unit in France and Flanders and on his discharge was awarded the Victory and British War medals.  It is not known when his family moved but by 1920 he was living at Hartgrove Farm, Fontmell Magna, Shaftesbury, Dorset.   He married Ada Mary Shute at the Parish Church in Marnull, Dorset, on 18th May 1920.  By 1922 he had moved to Putney, London, and was there until at least 1925.  By the time of the 1939 Register he was living at Moorcourt Farm, Moorside, Sturminster, Dorset, and was described as a Dairy Farmer.  His death was registered in the Weymouth, Dorset, Registry in 1983 and he was buried at Marnull, Dorset, on 4th May 1983.  His name appears on the Fontmell Magna Roll of Honour.
Images:
Links to related web content / sources: The National Archives 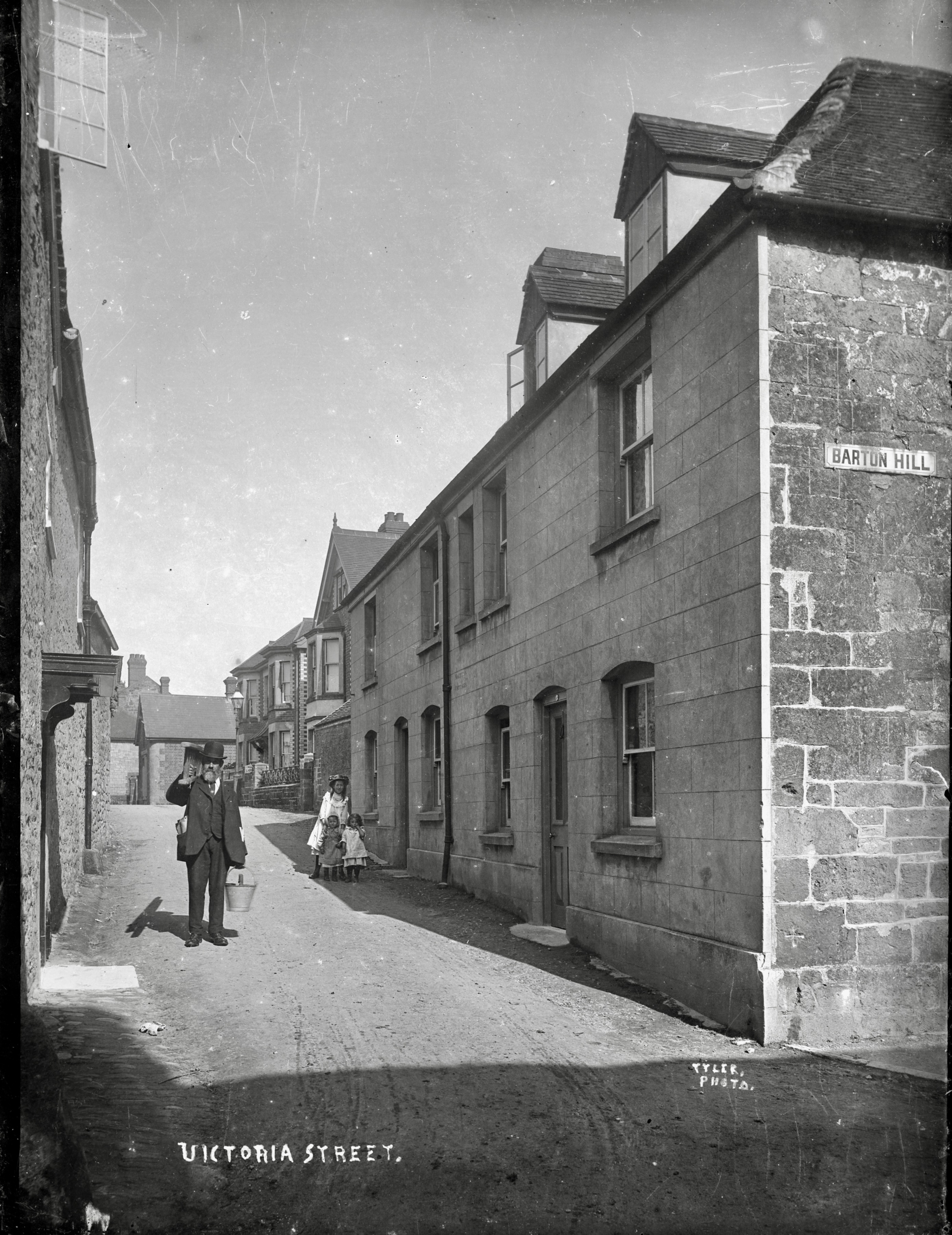 Surname: Morgan
Other names: Percival Stewart
Other people in this story: George MorganEmily Morgan née BrockwayJessie Mary Morgan née Brockway
Locations in this story: Victoria Street, Shaftesbury, DorsetAmbala, Punjab, IndiaFrizinghall, YorkshireFinchley, London, N3Hendon, Middlesex
Story: Percival Stewart Morgan was born in Shaftesbury, Dorset, on 10th November 1887 and baptised at Holy Trinity Church on 4th December 1887, the son of George Morgan and Emily Morgan (née Brockway).  He lived most of his early life at the family home at 7 Victoria Street, Shaftesbury.  (NB. Victoria Street was formerly called Malthouse Lane (see 1881 Census).  By the time of the 1911 Census, Percival had enlisted with the 1st Kings Dragoon Guards as a Shoeing Smith (Service No. D/902).  He was based at Ambala, Punjab, India.  He was eventually discharged on 16th December 1919 and awarded the Victory and British War medals as well as the 1914 Star (his medal record shows he was not eligible for the 1915 Clasp).  He married Jessie Mary Brockway at St. Margarets Church, Frizinghall, Yorkshire, on 26th March 1921.  The 1939 Electoral  Register shows him living at 192 Regents Park Road, Finchley, London, N.3. His entry in the 1939 Register is still officially closed.  His death was registered at the Hendon, Middlesex, Registry on 8th November 1954.

Percival's brother Sidney Charles (b.1885) also served in the war, with the Dorsetshire Regiment and the Royal Engineers.
Images:
Links to related web content / sources: The National ArchivesSidney Charles Morgan

Surname: Arnold
Other names: William James
Other people in this story: Thomas ArnoldThirza Arnold née CaseChristina Arnold née HaddockMary Arnold née Vokins née GillRobert Vokins
Locations in this story: The Street, Motcombe, Shaftesbury, DorsetFrance & FlandersCanterbury, KentIndiaYork, YorkshireBirmingham, WarwickshireBrighton, Sussex
Story: William James Arnold was born in Motcombe, Shaftesbury, Dorset, in 1876 and baptised in Motcombe on 3rd September 1876, the son of Thomas Arnold and Thirza Arnold (née Case).  He lived with his parents in The Street, (adjacent to the old Royal Oak Inn), Motcombe, until by 1901 he had joined the 1st Battalion of the Royal Dragoon Guards (Service No. 4464).   By 1901 he was stationed in Canterbury, Kent, from where he did service in India.  He married Christina Haddock in York, Yorkshire, on 18th November 1903 and, by 1911, he was on Reserve and living at 9 Ped Buildings, Ped Street, Birmingham, Warwickshire, working as a Railway Carman.  His wife died on 18th July 1915 (leaving three children) shortly after he had enlisted on 5th May 1915 and joined the Royal Field Artillery, 64th Brigade, No. 4 Depot, as a Shoeing Smith (Service No. 98883).  He served in France and whilst there, on 10th August 1918, he was diagnosed with a tumour on his chest.  He was repatriated to the UK on 15th August 1918 and admitted to the 18th General Hospital, Brighton, Sussex.  On the 12th October 1918 he re-married, to Mary Vokins (née Gill) (widow of Robert Vokins) at Holy Trinity, Micklegate, York.  He was eventually discharged on 14th March 1919 and was awarded the Victory and British War medals.    He went to live at 1 The Avenue, Ellen Street, Spring Hill, Birmingham, and died there in 1938 aged 61 years.
Images:
Links to related web content / sources: The National Archives

Surname: Burr
Other names: Wilfred Tom
Other people in this story: Thomas BurrEllen Selina Burr née JenkinsLily Elizabeth Burr née Goult
Locations in this story: Shaftesbury, DorsetEnmore Green, Motcombe, DorsetBrierley Road, Leyton, EssexWest Ham, Essex
Story: Wilfred Tom Burr was born in Shaftesbury, Dorset, on 17th January 1894 and baptised at Holy Trinity Church on 25th February 1894, the son of Thomas Burr and Ellen Selina Burr (née Jenkins). The 1901 Census shows the family living in Enmore Green, Motcombe, Dorset. He enlisted on 31st August 1914 with the 5th Dragoon Guards as a Private (Service No. 10118) but was soon discharged on 5th October 1914 due to defective eyesight. He married Lily Elizabeth Goult in 1921 in the West Ham, Essex, Registry area. They went on to have four children. By 1939 the family were living at 48 Brierley Road, Leyton, Essex, and Wilfred was working as a Slaughterman. He died in 1954.
Images:
Links to related web content / sources: The National Archives

Surname: Tapper
Other names: William Frank
Other people in this story: James Thorne TapperEmma Tapper née MerrifieldAnnie May Andrews Tapper née Hansford
Locations in this story: Melbury Abbas, DorsetNew Borough, Wimborne, DorsetPoole, DorsetLong Burton, DorsetFrance
Story: William Frank Tapper was born on 8th January 1883 at Melbury Abbas, Dorset, the son of James Thorne Tapper and Emma Tapper (née Merrifield). By 1891 the family had moved to Long Burton, Dorset. William enlisted with the Hampshire Regiment as a Private on 10th January 1902, later transferring to the Dragoons of the Line (Service No. 5911). He was discharged to the reserves on 9th January 1914 and took up employment as a Baker. He had married Annie May Andrews Hansford at Wimborne, Dorset, on 2nd April 1911. They went on to have two children. He was re-embodied on 5th September 1914 and joined the Dragoon Guards (2nd Queen's Bays) as a Private. (Service Nos. GS7970 and DR13349). After serving in France he was eventually demobilized on 1st May 1919 but not before a spell in hospital with influenza. He was awarded the Victory and British War medals. By the 1939 Register he was living at 25 New Borough, Wimborne, Dorset, and working as an Assurance Agent. He died on 12th July 1959 (Registered at Poole, Dorset).